My Pharmacy is the Best Place to Buy Naproxen UK. To Buy Naproxen Tablets Online in the UK you are required to have a prescription, which you can acquire with our free online consultation service.

Through My Pharmacy you can Buy Naproxen 500mg UK Next Day Delivery. Each treatment is sent out in secure and discreet packaging ensuring that you get your medicine on time and intact.

What is the Best Pain Relief Online?

Naproxen 250mg & Naproxen 500mg is a ‘Non Steroidal Anti Inflammatory Drug’ or NSAID. Inflamed and painful joints and muscles can make it difficult to move around in your daily tasks. As a non-steroidal anti-inflammatory drug, Naproxen works by decreasing hormones that trigger pain and inflammation. 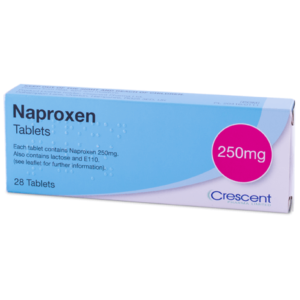 This makes Naproxen ideal for pain relief treatment for conditions such as rheumatoid arthritis, osteoarthritis, bursitis, tendinitis, period pain, back pain, shoulder pain, knee pain, and more. Naproxen works by decreasing the hormones that trigger pain and inflammation in the body.

Naproxen Tablets can relieve pain, swelling, redness and heat (inflammation) and is used to treat adults for:

• Problems with muscles, joints and tendons, like strains, gout, ankylosing spondylitis (pain and stiffness in the neck and back), dental pain or arthritis.

It works by limiting the body’s natural production of substances and chemicals that lead to inflammation (prostaglandins).  These substances help tell the body that there is something wrong and the individual feels these signals as body pains.

Naproxen is considered one of the best pain relief online for period pain.

You can buy Naproxen UK via My Pharmacy by filling out the above free consultation form.

Like with all medicine, Naproxen Side Effects can occur but aren’t experienced by everyone. If you experience any of these Naproxen side effects, especially if any of them are getting worse after taking it, immediately stop and speak to your doctor.

It is possible to have an allergic reaction when taking Naproxen 250mg. These symptoms include –

Below is a list of Naproxen Side Effects experienced more, or less when people have taken Naproxen 250mg.

For more information on Naproxen Side Effects, take a look at Naproxen BNF.

What Is Naproxen Used For?

We are often asked “What is Naproxen used for?”

To help with inflammation and healing, the body release chemicals known as Prostaglandins. When these chemicals are released, as well as the benefits, they also cause some negative side effects such as pain and fever.

These Prostaglandins are produced by an enzyme called cyclooxygenase (COX). Naproxen and other NSAIDs work to reduce the amount of COX-1 and COX-2 that are produced.

Whilst the COX-2 enzyme is the one that creates prostaglandins that cause pain and fever, the COX-1 enzyme helps protect the stomach lining from any damaging effects of acid. This is why when sometimes taking NSAIDs or Naproxen, your stomach can produce ulcers.

Naproxen 250mg and Naproxen 500mg is typically used pain relief. It reduces inflammation and pain in joints and muscles. For more information, take a look at Naproxen BNF.

This should answer the question of what is Naproxen used for.

The dosage of Naproxen 250mg or Naproxen 500mg depends on what the medication is being used to treat. Your doctor should prescribe as low a dose as possible. This will reduce any side effects you may experience.

• Rheumatoid arthritis, osteoarthritis and ankylosing spondylitis: 500mg-1g a day in two doses at twelve hour intervals. If 1g is needed this can be given as two 500mg doses or as a single dose.

• Attack of gout: Initially 750mg as a single Naproxen dose then 250mg every 8 hours until the attack has passed.

• Muscle, bone disorders and painful periods: Initially Naproxen 500mg as a single dose then Naproxen 250mg every 6-8 hours as necessary. Up to a maximum of 1250mg a day may be given after the first day.

The dosage of Naproxen 250mg or Naproxen 500mg depends on what the person is using it for. It is generally agreed upon to use the lowest effective dose for the shortest possible duration. This helps prevent/reduce the chance of any side effects occurring.

Want the best Naproxen tablets online? Simply fill out the above consultation form, free of charge and proceed to checkout.

If Naproxen and alcohol is taken together and you notice any symptoms of stomach/intestinal bleeding, call your doctor immediately. These symptoms include black, tarry or bloody stool, or any coughing that brings up blood/vomit that appear like coffee grounds.

Cocodamol and Naproxen can both be taken together. Cocodamol is an opioid-type painkiller and others like it can be taken with Naproxen such as codeine, tramadol and morphine.

Cocodamol and Naproxen can be used together to further help relieve any pain you may experience during an illness such as arthritis.

Naproxen Over The Counter

Naproxen over the counter is not available.

Naproxen for headache relief is a slightly controversial topic. Studies have shown that Naproxen is not as good as other medicines such as Ibuprofen or Sumitriptan in treating a headache or migraine.

Using Naproxen for headache relief is possible. The dose can be from 550mg of Naproxen sodium every 12 hours and could increase to 825mg if it’s needed. The daily dose of Naproxen should not exceed 1,375mg.

Other NSAIDs and treatments can be used to reduce the pain experienced from headaches and migraines. These may provide better relief and can be bought from My Pharmacy UK.

There are a number of different NSAIDs available and each vary in their duration, potency and how strongly they inhibit COX-1/COX-2.

Here are some alternatives to Naproxen Tablets. Buy Naproxen UK and other alternatives online via My Pharmacy UK. The best Naproxen tablets online are available here.

Arthritis is a common condition that causes pain and inflammation in a joint. In the UK, around 10 million people have arthritis. It affects people of all ages, including children.

The two most common types of arthritis are:

Osteoarthritis is the most common type of arthritis in the UK, affecting around 8 million people.
It most often develops in adults who are in their late 40s or older.

Osteoarthritis initially affects the smooth cartilage lining of the joint. This makes movement more difficult than usual, leading to pain and stiffness.

The most commonly affected joints are those in the Hands,Spine,Knees andHips

In the UK, rheumatoid arthritis affects more than 400,000 people. It often starts when a person is between 40 and 50 years old. Women are three times more likely to be affected than men.

The outer covering (synovium) of the joint is the first place affected. This can then spread across the joint, leading to further swelling and a change in the joint’s shape. This may cause the bone and cartilage to break down.

Other types of arthritis and related conditions

Ankylosing spondylitis – a long-term inflammatory condition that mainly affects the bones, muscles and ligaments of the spine, leading to stiffness and joints fusing together.

Fibromyalgia – causes pain in the body’s muscles, ligaments and tendons.

Gout – a type of arthritis caused by too much uric acid in the body. This can be left in joints (usually affecting the big toe) but can develop in any joint. It causes intense pain, redness and swelling.
Psoriatic arthritis – an inflammatory joint condition that can affect people with psoriasis.

Secondary arthritis – a type of arthritis that can develop after a joint injury and sometimes occurs many years afterwards.

Polymyalgia rheumatica – a condition that almost always affects people over 50 years of age, where the immune system causes muscle pain and stiffness, usually across the shoulders and tops of the legs. It can also cause joint inflammation.

Period pain is common and a normal part of your menstrual cycle. Most women experience it at some point in their lives.

It’s usually felt as painful muscle cramps in the tummy, which can spread to the back and thighs.

The pain sometimes comes in intense spasms, while at other times it may be dull but more constant.

What causes period pain?
Period pain occurs when the muscular wall of the womb tightens (contracts).
During your period, the wall of the womb starts to contract more vigorously to encourage the womb lining to shed away as part of your monthly period.

When the muscular wall of the womb contracts, it compresses the blood vessels lining your womb. This temporarily cuts off the blood supply – and hence oxygen supply – to your womb. Without oxygen, the tissues in your womb release chemicals that trigger pain.

While your body is releasing these pain-triggering chemicals, it’s also producing other chemicals called prostaglandins. These encourage the womb muscles to contract more, further increasing the level of pain.

Period pain linked to an underlying condition tends to affect older women. Women aged 30 to 45 are most commonly affected.

Conditions that can cause period pain include:

endometriosis – where cells that normally line the womb start to grow in other places, such as in the fallopian tubes and ovaries; these cells can cause intense pain when they shed and fall away
fibroids – non-cancerous tumours that can grow in the womb and can make your periods heavy and painful
pelvic inflammatory disease – where your womb, fallopian tubes and ovaries become infected with bacteria, causing them to become severely inflamed
adenomyosis – where the tissue that normally lines the womb starts to grow within the muscular womb wall, making your periods particularly painful

The more common side effects that occur with naproxen oral tablet include:

Stomach pain
Constipation
Diarrhea
Gas
Heartburn
Nausea and vomiting
Dizziness
Mild side effects may go away within a few days or a couple of weeks. Talk to your doctor or pharmacist if they’re more severe or don’t go away.

Chest pain
Shortness of breath or trouble breathing
Weakness in one part or side of your body
Difficulty speaking
Swelling of the face or throat
High blood pressure
Bleeding and ulcers in your stomach and intestines, with symptoms such as:
Stomach pain
Bloody vomit
Blood in your stool
Black and sticky stool
Asthma attacks in people who have asthma
Low red blood cell count, which can cause fatigue, lethargy, and weakness
Yellowing of your skin or the whites of your eyes
Unusual weight gain or swelling of your arms, legs, hands, and feet
Skin rash or blisters with fever